DOWAGIAC — No notice, no problem. Local residents were chomping at the bit for a bite of barbecue.

Despite giving the community no warning, OAK + ASH BBQ, 109 S. Front St., officially opened Thursday to an “overwhelming” response from the community. According to the restaurant’s co-owner, Tim Tinker, the restaurant posted on Facebook at 4 p.m. that its doors were open and by 5:30 p.m. the post had more than 4,000 views. By 10 p.m., their message had reached over 16,000 people and the restaurant was still teeming with customers.

“The community support is phenomenal,” Tinker said. “The fact that people changed their plans so quickly on a Thursday night to come in and pack the house…it’s amazing.”

By 9 p.m., the restaurant had run out of most of its smoked meats.

“Very grateful,” said chef and co-owner Alain Helfrich, of his feelings after the busy first day. “It was better than I expected, which is super sweet.”

With Helfrich tending to the smoker he rented from Niles’s Cotton Gin Smokers most of the day, he said he didn’t see many people enjoying the food. However, when he had the chance to enter the restaurant, he was pleased with what he saw.

“My favorite thing is seeing their jaws drop when they walk in, because it’s so different,” Helfrich said of the changes they’ve made since taking over the old space. Zeke’s Restaurant last fall. The awnings of the old Zeke have been removed, the building has been repainted, the interior has been stripped down to its original late 1800s construction, and historical Dowagiac memorabilia have been placed throughout the restaurant.

OAK+ASH is part of the Haunt of Hounds restaurant group, made up of Helfrich, Tinker, Jordan Mullins and Austin Cabello. The group also owns Propaganda Pizza in Sister Lakes, Fatbird in South Bend, and other restaurants. As for the opening day experiences, Tinker said if he had to rate the day, he would give it a B+.

“I’m excited for the next chapter of this restaurant,” Tinker said. “We’ve been building it for six or seven months, and now we’re doing what we know how to do, which is running restaurants. So we’re really excited about that.

The reason for the relatively quiet opening, according to Tinker, is that it allows the restaurant to execute the same level of service from the first customer, without outside waits or queuing at the door.

“I’ve worked a lot of really bad opening days, and I’ve worked some really good ones,” Tinker said. “Doing it slowly and quietly is the best way. … The last thing I want to do is alienate a bunch of people on day one because we’re not ready to serve 200 people at once. This way we can give everyone the service they deserve and expect from our staff.

For starters, OAK+ASH hours will be Wednesday through Saturday from 4 p.m. to 10 p.m. and 12 p.m. to 8 p.m. on Sunday. Tinker said once the restaurant is full, he would like to open seven days a week, including lunch service.

The OAK + ASH menu is based on the Texas-style barbecue. Helfrich scoured the country for the best barbecue and said he used everything he learned to develop the OAK + ASH menu.

Smoked meat options include oak-smoked pork belly and shoulder, mesquite-smoked ribs, cherry-smoked turkey, pecan-smoked sausage, and hickory-smoked chicken. Oak, hickory and cherry smoked prime ribs are also available on the bone. Meat prices range from $4.50 for a quarter pound of smoked turkey to $60 for a bone-in prime rib that the menu calls “The BBQ Rib Eye.” Chef Helfrich said prime rib is smoked for more than 16 hours, contains more than a pound of meat, is one of his favorite foods and well worth the cost.

“One of the first tables today, we ordered two prime ribs,” Helfrich said. “I was very happy with it.” 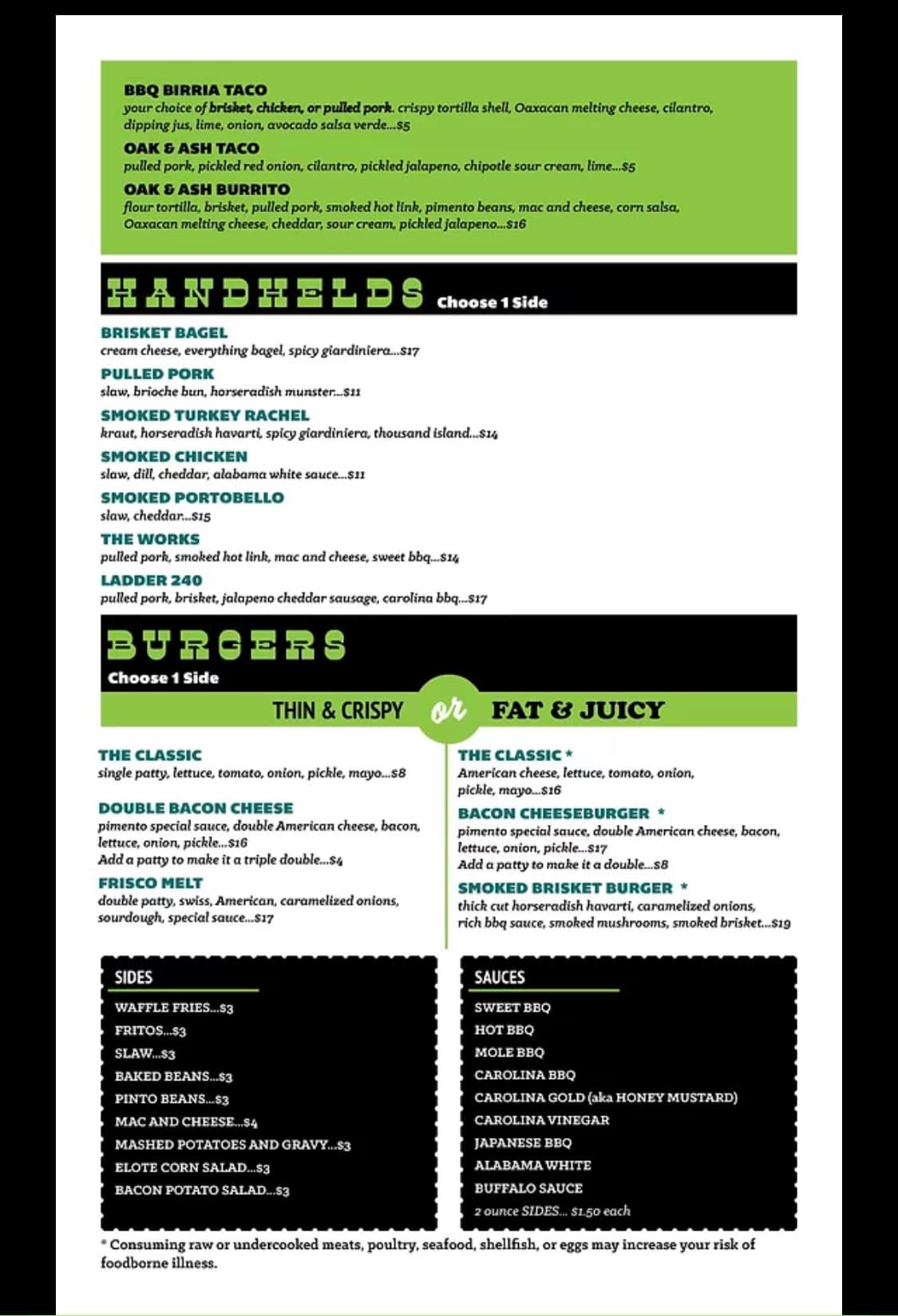